Let MTS Be Your Wingman to these Top Gun Filming Locations 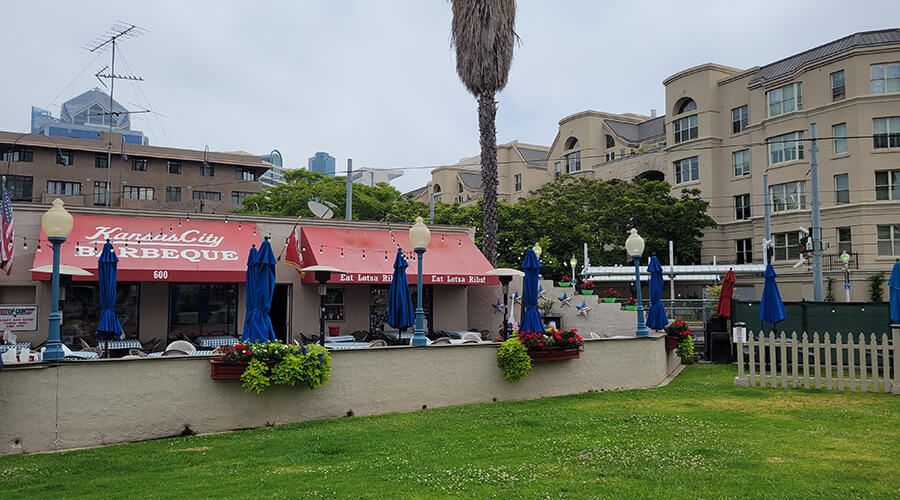 The new Top Gun: Maverick movie released in theaters this week, and what better way to celebrate than to revisit some of the filming locations from the original 1986 movie? San Diego is featured in many of the filming locations in Top Gun, with several spots easily accessible via MTS. Take advantage of the upcoming holiday weekend to visit these spots! (And warning, if you haven’t seen the original movie, spoiler alerts ahead!)

A few scenes from Top Gun were filmed at the former Naval Training Center (NTC) now known as Liberty Station.

How to get there:
Take the UC San Diego Blue Line or Sycuan Green Line Trolley to Old Town Transit Center and transfer to Route 28. 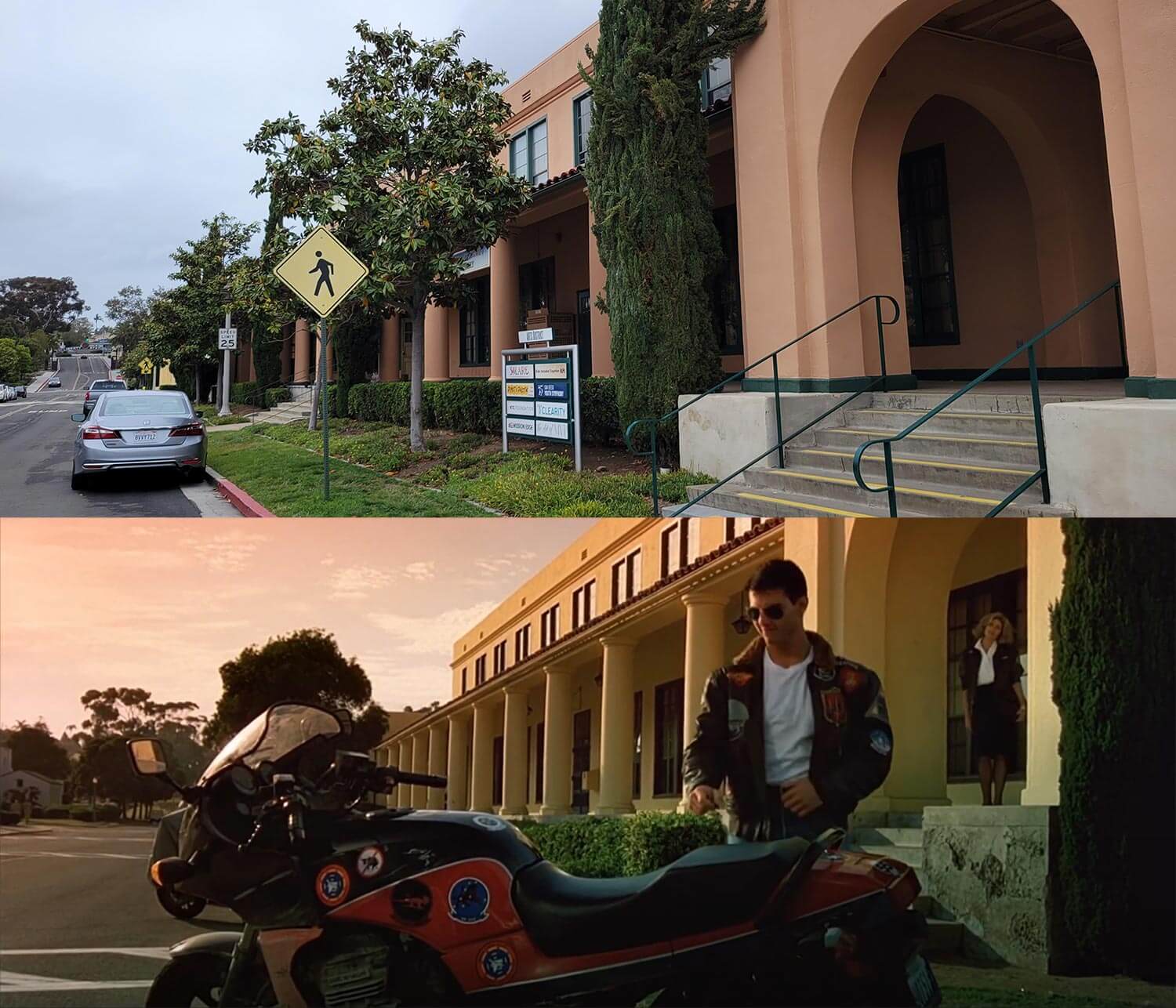 For the first destination, walk down Roosevelt Road (under the Liberty Station monument sign) to Solare. The original Top Gun filmed some of the training room scenes here - one in particular is the scene right before Charlie chases Maverick on his motorcycle before telling him that she thinks she’s falling for him. 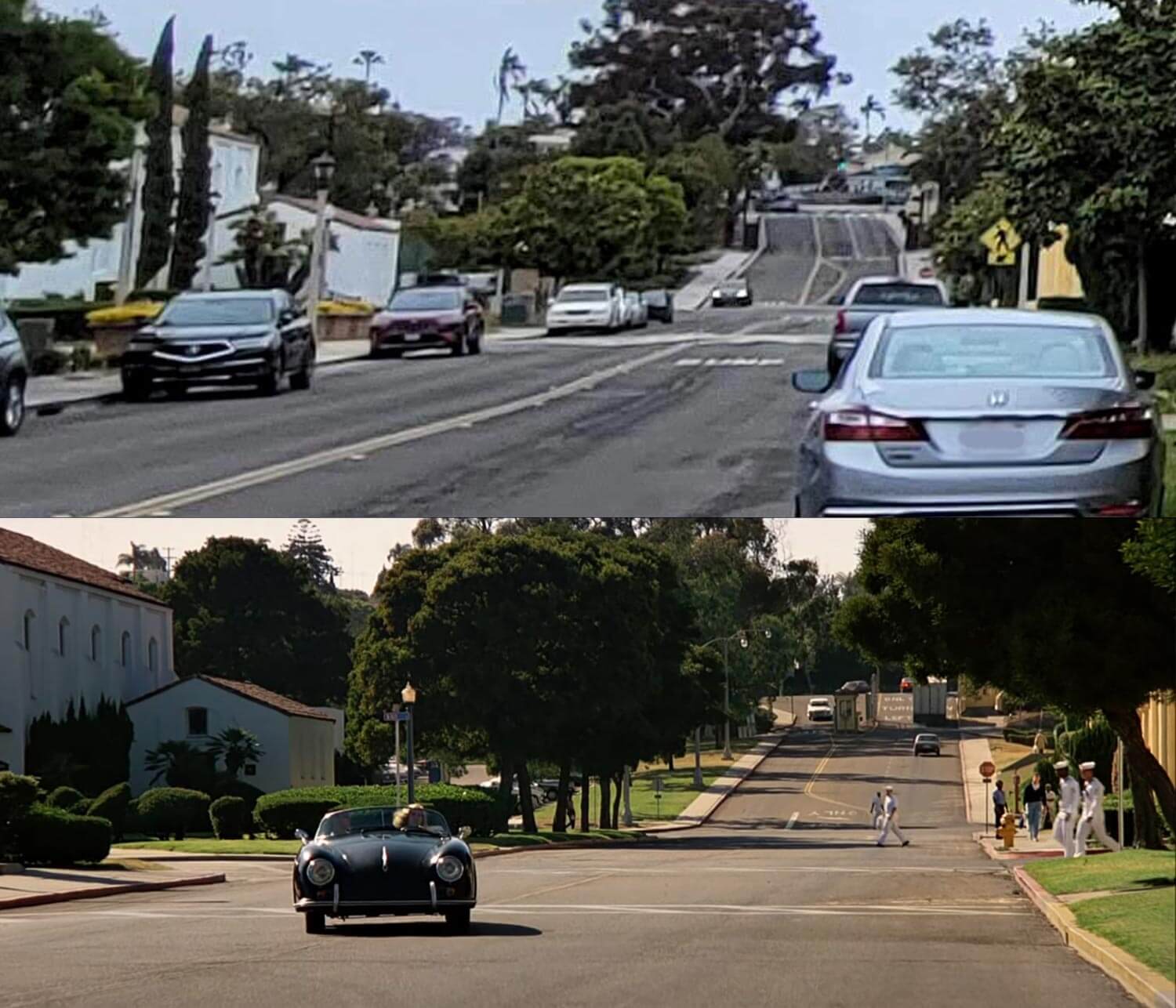 Another scene where you can spy Liberty Station in the background is after Charlie drops off Maverick after Goose has died (again in front of Solare). This scene is right before Maverick goes to console Goose’s widow, Carole. In the distance it looks like there used to be a guard booth to enter the training center. That is no longer there but spanning that entrance you will now find the Liberty Station sign.

Kansas City Barbeque is conveniently located across from the Seaport Village station in Downtown San Diego, and one of the easiest locations to visit via MTS. With trains coming every 15 minutes during the day, this makes for an easy spot to check out a Top Gun filming location and grab some lunch.

How to get there:
Take the Sycuan Green Line to Seaport Village station 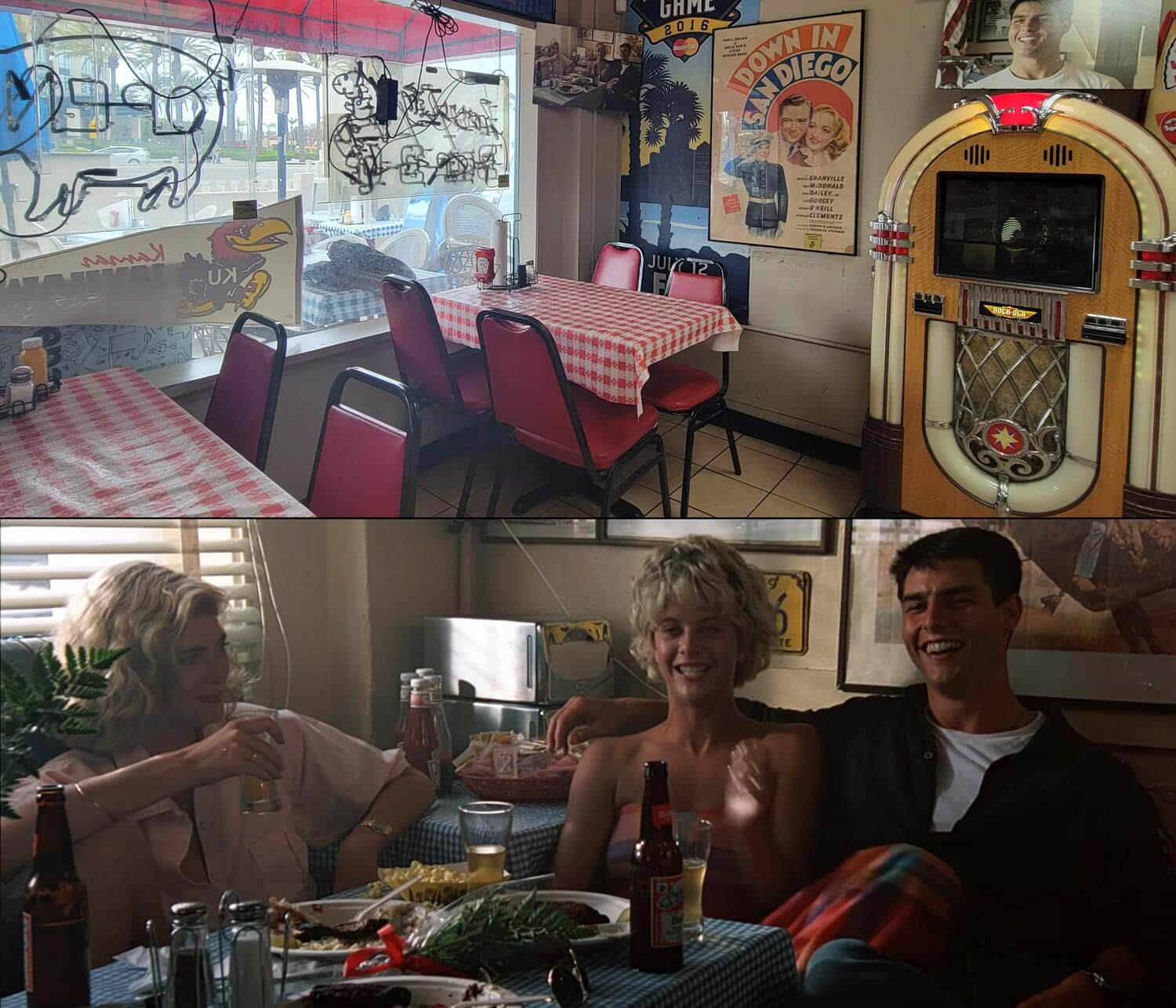 When you enter through the left side door and turn to your left, you’ll find the table where the gang sat while Goose sang “Great Balls of Fire” with his son on the piano. In person, there’s a photo of Charlie, Carole, and Maverick right above the spot where this scene was filmed. 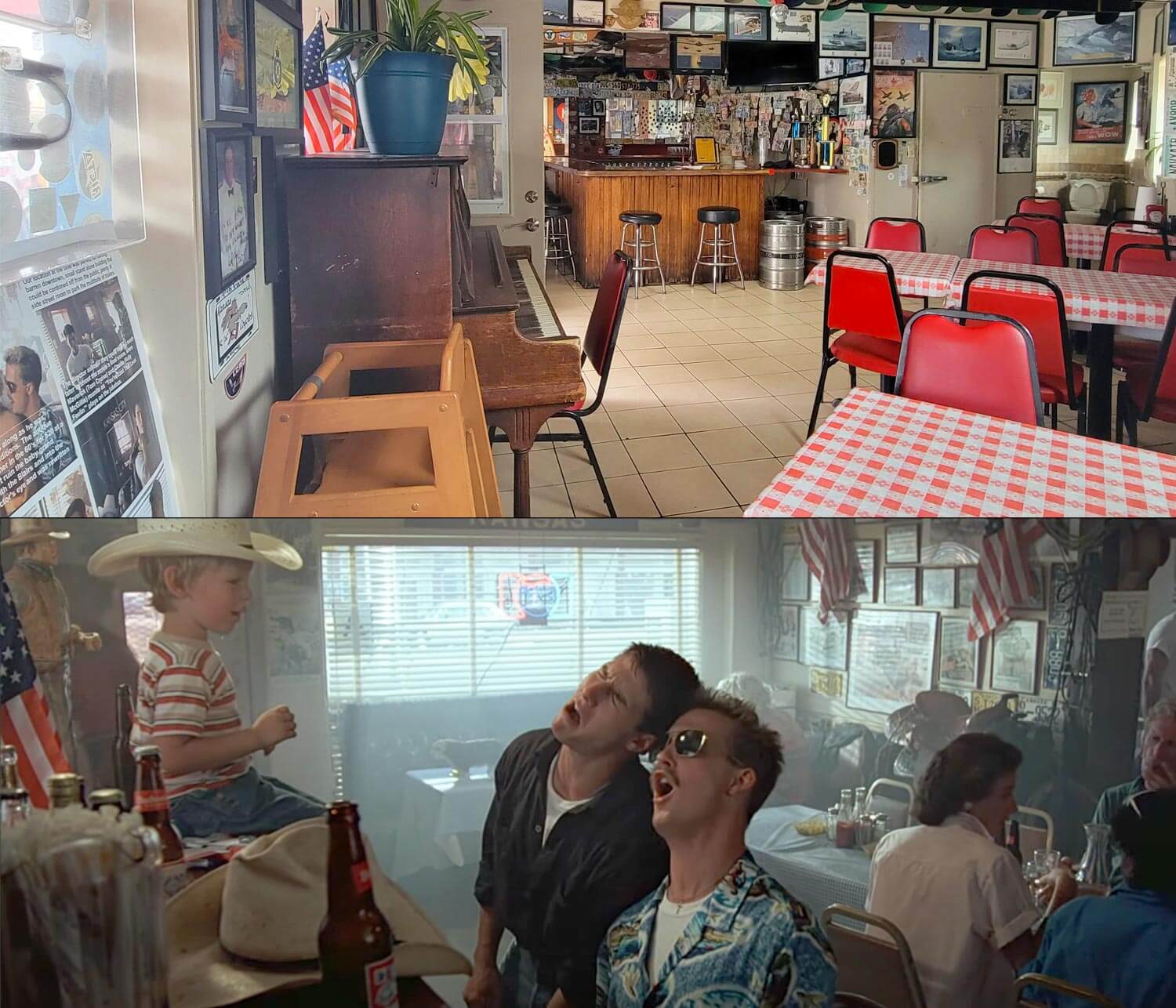 In the movie, the piano is located next to that corner table but in reality, the piano is located on the other side of the restaurant. In the corner by the piano are some boards with photos talking about some of the things that happened behind the scenes. One interesting note - rewatch the movie and you’ll see that on the piano is a crumpled-up piece of paper above the piano keys. Anthony Edwards kept forgetting the lyrics to “Great Balls of Fire” and someone wrote the lyrics down for him. 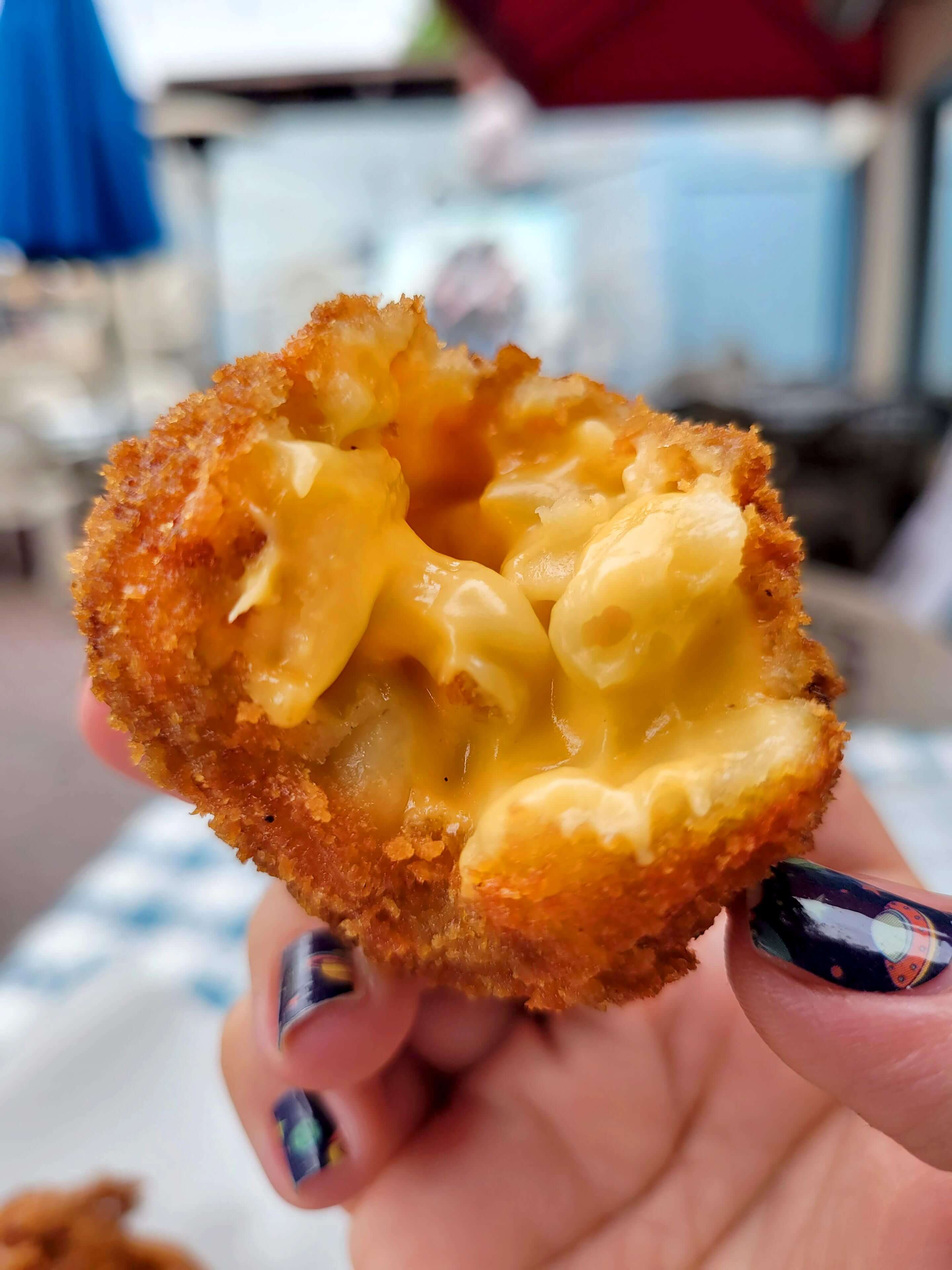 Speaking of “Great Balls of Fire” - you can order them on the menu at Kansas City Barbeque! They are mac and cheese balls with Frank’s RedHot sauce. Though you may opt for the “Great Balls” without the extra “fire” if you’re not into spicy food. 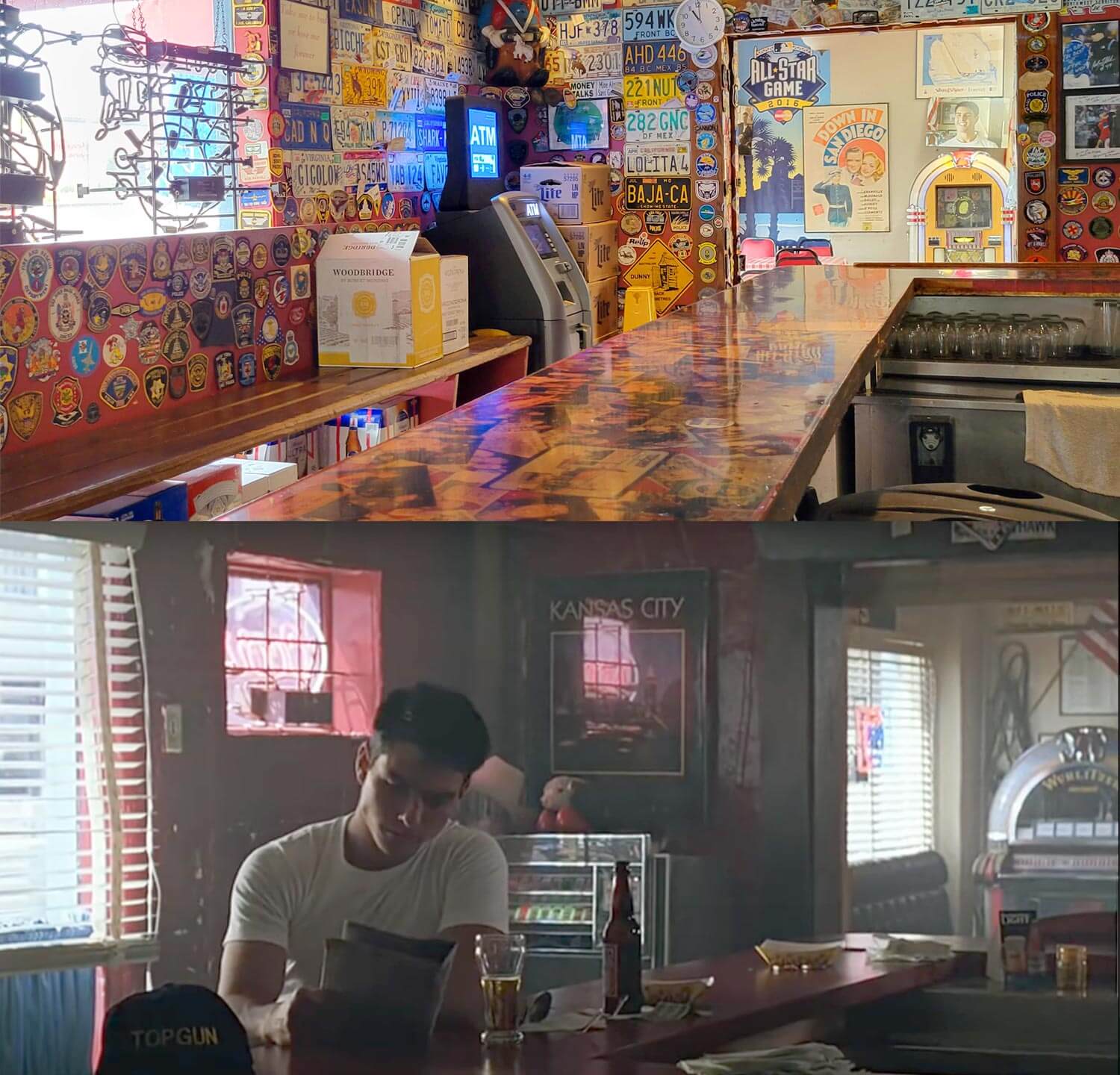 At the end of the movie, Maverick returns to the bar. The jukebox starts to play “You’ve Lost That Lovin’ Feelin’” and Maverick gets nostalgic before Charlie reveals that she started the song and they reunite. Happy feels all around!

Located at Belmont Park, The Plunge served as the locker room scene where Maverick and Iceman have a fight and Iceman tells Maverick that he’s too dangerous. Route 8 will get you to the Plunge and Belmont Park, and you can catch it from the Old Town or Balboa Avenue transit centers.

Maverick tried to swoon Charlie with his rendition of “You’ve Lost That Lovin’ Feelin’” in the Mississippi Room at the Lafayette Hotel in North Park. Rapid 215 (with service between SDSU and downtown San Diego) or Route 1 will swoon – err, swing – you by this filming location. If traveling from Mission Valley or the Green Line, you can also take Route 6 up Texas St.

Charlie’s house from the movie is now a restaurant called the High Pie located in Oceanside, CA where they serve bite sized apple and cherry “high” pies. For an additional $2, you can get a “government cheese” dip for your pie (cheese on pie, we hear it’s a thing). Take MTS to the Santa Fe Depot or Old Town transit centers, then catch the COASTER north to the Oceanside Transit Center, just a few blocks from High Pie.

After Charlie chases Maverick in her car as he zooms up one of the steep streets in Bankers Hill on his motorcycle, they park on the side of the street at W Laurel and Union and Charlie has a confession for Maverick. The “I’m Falling For You” spot where they kiss is about a half mile walk from the Middletown Station using the UC San Diego Blue Line or Sycuan Green Line.